The NRG PLL Pro III 4 Watt Version Exciter/Transmitter was supplied ready built and tested, direct from NRG in Bradford. The built price is Ł114.95.  The unit is also available as a kit (build-it-yourself), for Ł79.95. Note that this is a mono unit, for stereo it must be used in conjunction with a stereo encoder.

Eight pages of documentation are provided.  This covers:

The single-sided printed circuit board has a component placement silk screen on the top side, and a bottom solder resist to assist in making good solder joints. Four plastic PCB pillars are provided to stand the PCB off the mounting surface. 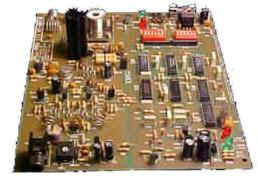 No tuning to required to set-up the RF stages. The adjustments necessary to get on air are to:

As this unit requires no RF tuning, home constructors can have more confidence that, providing they have correctly followed the assembly instructions, the resulting unit will have the same high specification (low levels of harmonics and spurious) as units built and tested by the manufacturer.

The combination of a clearly marked component silk-screen on the PCB, a schematic and a parts list should help to minimise any constructional errors and assist in fault finding.

The audio input network has a potentiometer to set the audio level and jumper selectable pre-emphasis (none, European 50 uS or USA/Japan 75uS). If the unit is to be used with a stereo encoder, the pre-emphasis must be disabled. The transmitter uses the standard PLL architecture. The PLL error voltage is summed at the input of the audio buffer, which is implemented by a BC558 transistor. The PLL error voltage enables the RF output frequency to be locked to the frequency of a stable crystal reference oscillator. The summed PLL error voltage and audio modulation voltage is applied to the VCO by means of a dual varicap diode.

As appears to be standard in products from NRG, the voltage controlled oscillator (VCO) is based on a novel double-ended architecture operating at half the output frequency. NRG are keen on half frequency VCOs, the claim being that this architecture is more resistant to RF feedback from later stages (a scenario not unknown in the typically poorly shielded layouts found in home-built radio systems) and be more resistant to mysterious audio hum. The variable trimmer VC1 sets the centre frequency of the VCO - more of this later. An RF sample is taken from the VCO (still at f/2) to the PLL. The VCO receives its power from a separate zener-stabilised supply rail. The PLL programmable divide chain is implemented by a handful of 74LS logic (74ALS for the first divide), rather than using a synthesiser chip. The advantages of this scorched-earth style policy include:

The RF output frequency is set by a bank of 12 DIL switches. The output frequency resolution is 100 kHz, from 87.5 MHz to 108 MHz. In the review unit, there was a mistake in the frequency look-up table: for frequencies 92.9 MHz through to 94.4 MHz, the entry for Switch 2 #1 should read "OFF" instead of "ON". NRG have said this will be corrected in the documentation accompanying future units. A pair of LEDs indicate lock status, green for locked and red for unlocked. The lock time of the PLL is long (several seconds). The 6.4 MHz PLL reference does not have any fine-tune facility, but on the review unit the output frequency error was a mere 500 Hz.

After the VCO, the following RF amplifier/frequency doubler is based on a 2N4427 transistor biased into class B. The PLL-out-of-lock power-down feature is implemented here, by a transistor in the 2N4427's emitter circuit. This feature can be disabled by a jumper. The output stage is based on a 2SC1947, fitted with a tall push-on aluminium heatsink. The nifty design of the RF amplifier has resulted in no RF tuning required to achieve a minimum of 4W of RF output (at 13.8V supply) across the FM broadcast band. The output power selection feature is implemented by simply introducing a pair of 1W resistors into the collector feed of the output device. This reduces the output power to around 1W. For 4W operation, these resistors are bypassed by a jumper.

Following the output stage is a 7 pole low pass filter (LPF). A sniff of the RF output power is rectified and used to drive a LED, the brightness of which gives a rough indication of RF output power. The RF output connector is a SO239 (UHF) socket, mounted on the PCB. The DC supply is wired directly to the PCB and is well filtered. Reverse polarity protection is provided by a diode crowbar. An on-board 5V regulator drives the logic. A red LED indicates DC power is reaching the unit.

The only equipment required to test this unit is a +12 to +15V stabilised power supply capable of delivering 1A and a dummy load. A small dummy load, rated by NRG at 2W, is supplied with the unit.  This load is made of a UHF plug with a resistor soldered inside it. It is prudent to check the output frequency of the unit with a frequency counter or digital receiver to check the output frequency is where you think it is.

With a 13.8V supply, for each 500 kHz step in output frequency, the output power and supply current were accurately measured and plotted below. The documentation received with the unit states, "The position of VC1 has to be set quite accurately". This statement is totally accurate. I found  VC1 had to be readjusted to re-achieve PLL lock even with a frequency step as small as 500 kHz. .It's quite easy to get "lost" if you find yourself a long way from the correct setting of VC1. In an email to me, NRG suggested the optimum VCO correction voltage (measured at the emitter of TR1) is 3.2 V. I found my VCO voltages across the frequency band were between 2.6 and 3.8 V, the average of these two voltages being 3.2 V. This is certainly a useful piece of information if you can't find your VCO lock point. On my review unit, I observed that when you were close to the correct point, individual fast flashes become discernible in the "unlock" LED. When this happens, leave VC1 where it is and the unit will lock within a few seconds.

As can be seen from the graph, the output power remained over 4W for the whole frequency band.

The efficiency of this unit is good for a no-tune output stage,  If you take off the fixed 149 mA consumed when the RF output is shut-down, the DC to RF efficiency of the RF stages at 14V is 52%. The output device stayed sufficiently cool when operating at +13.8V supply. Care would be required if the unit were operated in a high ambient temperature.

As can be seen from the table and the spectrum analyser plots, the worst harmonic is at -64dBc, whilst the worst sub-harmonic is at -52 dBc. NRG have wisely avoided specifying themselves into a corner by only specifying a relatively modest -50 dBc for the harmonic performance. The close-in spurious performance is very good, the highest spur found was -74 dBc at 12.3 MHz offset from the carrier. NRG's specification limit is -70 dBc.

This amount of harmonic and spurious suppression is perfectly good enough for this unit to be connected directly to an aerial.

Due to the small output power capability of the unit, coupled with the low supply voltage, bad VSWRs are unlikely to damage this unit.  NRG quote a ruggedness of 20:1 SWR. This is pretty bomb-proof. I didn't spend any time trying to blow it up, though I dare say there's someone out there who can manage it. Suffice to say, whilst powering the unit up with no aerial connected is to be avoided, it is unlikely to result in damage.

Audio response has not measured.  By ear the audio sounded fine, with no hums or whistles.

The unit can of course be directly connected to an aerial, or used to drive an RF amplifier for more output power.  The vast majority of RF amplifiers currently have to be tuned to the operating frequency, although Broadcast Warehouse supply a range of broadband amplifiers (87.5 MHz to 108 MHz).  The additional complexity in a broadband RF amplifier over a tuned amplifier is not that great, and in my opinion more amplifiers of this type should/will become available  Here's my design for a 40W broadband amplifier.  Presently broadband (87.5 MHz to 108 MHz) aerials for transmit use are even thinner on the ground, though once again Broadcast Warehouse supply some (e.g. the Jaybeam 7050 folded dipole). I'd be interested to hear how much work is being done in this area.  It's worth noting that only the exciter determines the close in spurious products of the complete RF chain (assuming subsequent amplifier stages are working properly), and any external RF amplifier will need its own harmonic filter to follow it to keep harmonic radiation down to an acceptable level.

This is a high-performance FM exciter. The 4W plus of RF output power is enough to get you started without any necessity for additional RF amplifiers. In many applications, 4 W of RF output power will be sufficient. The unit is well documented, should be relatively straightforward to build and easy to set-up, and a minimum of test equipment required. The design of the exciter definitely favours educational content over a smaller component count. The only down-side in the current design is the excessive sensitivity of the trimmer that sets the centre frequency of the VCO, this results in changing RF output frequency being less straight-forward than it could be. This is a pity as no tuning adjustments are necessary to the RF stages when the RF output frequency is changed.